«The Lazer Police» is the upcoming single from Crighton’s debut EP.

The dreamy, groove filled song that describes the story of a video game bandit on the run from «The Lazer Police» was produced with Kurran Karbal at the Motor Museum Liverpool, a studio that boasts recordings from the Arctic Monkeys, Oasis and The 1975. With harmonic and sassy vocals from Zuzu featured throughout the track, this infectious song is sure to be a breakout hit for Callum.

The release will be based heavily on visuals, as Crighton’s 80’s style and bold image alongside the iconic sass from Zuzu is eye-catching and commanding of any room. The music video is a studio-shot video that showcases Crighton and Zuzu running through a hazy Labyrinth-esque world, riding electric scooters and looking to old analogue televisions for clues on how to escape «The Lazer Police». Expect colourful lights, rolling fog, too much glitter, and wind-machines galore. The video is being released alongside mini videos with Callum and Zuzu in this world, and the release aligns perfectly with the launch of Callum and Zuzu’s new ghost hunting show, «Bitchcraft», produced by Polyphonica, where we see the duo take on the supernatural world in search of ghosts and devils (to make record deals with, naturally).

Callum Crighton is a 21 year old pop artist with a resonating 80’s vocal style. Born and raised in Liverpool, UK, he has been producing and releasing music unsigned from his bedroom since 2016 and has managed to amass a large following, with over 300,000 views/streams across his animated and bold music videos. He dances around topics such as manifesting dreams and questioning the foundations of eternity within his synthesiser drenched piercing pop tracks. Inspired by the likes of MARINA and David Bowie, he is a self made artist but aims to one day grow into a pop legend. His previous musical endeavours were reminiscent of cheesy, Top of the Pops esque 80’s music, however transitioning to the new EP, is creating music with a much more moody, groove-heavy sound that  «The Lazer Police» will pave the way for. 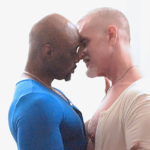