Despite the last year and all its challenges, queer pop artist Venn Smyth has made more musical connections from across the world than ever.

This is partly down to his independent queer pop playlist «Venn’s Quop»,,which has now been picked up as a radio show on GlitterBeam Radio with accompanying podcast and YouTube series.

«I started the playlist during the first lockdown in 2020. I had just released my debut single ‘Burn Me’ and with no gigs on the horizon, it was a way for me to try and connect with other LGBTQ+ artists and shine a spotlight on their work. I had no idea what a rich, talented and thriving community of artists I would discover and how the playlist would develop into something even bigger! I’ve made connections with other artists from the UK to the USA, Europe to Japan – the support everyone gives each other is amazing to see!», Venn Smyth.

One of these connections is closer to Venn’s homeland of Scotland. Elisabeth Elektra («Giddy electronic pop» MOJO, «Remarkable» Clash) creates «Queer Alien Art Pop» from her home in Glasgow. The electronic artist fell in love with Venn’s song «They Come for You» and asked to put her own spin on it. The result is the Elisabeth Elektra Remix (released everywhere 14 May 2021) that gives «great 80’s synth power pop vibes» (Track By Track Podcast), highlighting the important message of the song. Venn Smyth’s lyrics were inspired by the post-war poem by Martin Niem ller «First they came…». It is very much music with a message for today.

Elisabeth Elektra’s remix of Venn’s work is not the only one to come from Glasgow. Last year, Glasgow-based DJ Ben Howell shot to online fame and then quickly the radio airwaves with his mash-up of Dua Lipa’s «Hallucinate» and the BBC News Theme. His next project was to create a summer-ready bop of a remix for Venn.

Both tracks will form part of a remix version of his EP «Build This House Again» which Venn is to release over the coming months, working with other independent queer artists. He has also started writing new material with his new-found online music community, and will be releasing these collaborations later in the year.

Unashamedly pop with a strong message, Venn Smyth writes songs that dance around subjects and stories important to him. These include identity, queerness, community and finding your voice. He is from rural central Scotland, but currently lives in London. Alongside writing and performing, he teaches and works with young people, including leading LGBTQ+ youth music projects.

Pop, whether bedroom or dancefloor, is right at the heart of Elisabeth Elektra. Having worked with a fabulously varied bunch of collaborators including Ben Power of Fuck Buttons and Blanck Mass, Nurse With Wound’s Andrew Liles and kindred spirit John Fryer (This Mortal Coil) you can hear that Elektra has extracted every bit of noise and beauty she can from those she’s worked with. 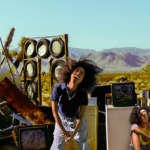